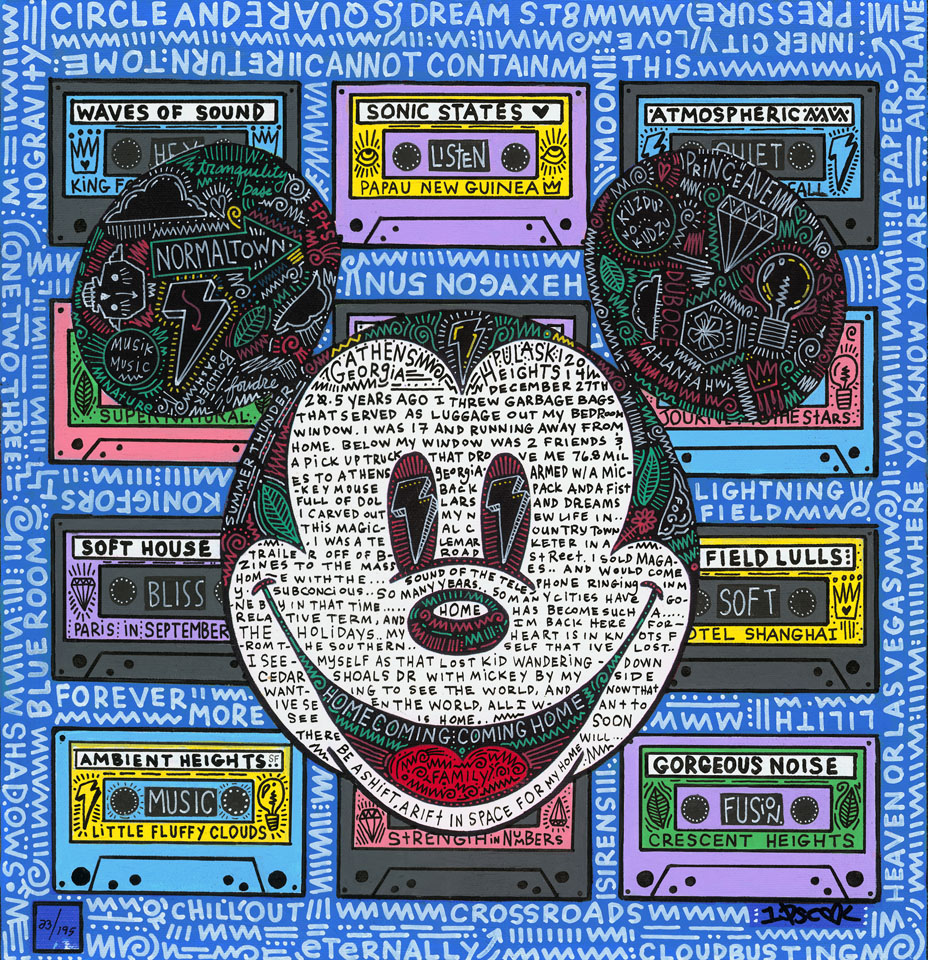 Music was the bright eyed and determined captain of my ship out in the rocky waters of my youth out in Marietta, GA. Whether it be the turbulent carpeted seas of my home, or the tsunami of backlash form my peers.. I often sought to lay in my bed and stare at the ceiling while listening to Kate Bush and wait for the storm to end. In my ears, the siren like sounds would guide me out of my enclosed padded cell of a head, and out into the lush fields of a world yet undiscovered.

Later on, in my teenage years, music became less of an escape, and more of a soundtrack to a life that I learned to control. Through the linear path of my first romances, to my struggle to identify why I was such an outsider among my peers.. Music was this answering pathway to my present and a beacon to carve out my future.

In originally doing the mixtape piece, which was entitled “Rewind the Future”, the mixtapes were originally based on the core characters of Disney. The tapes were labeled with “Goofy’s Glamrock”, “Minnie’s Motown”, and more… and these pieces focused on merging 80’s nostalgia with the love of Disney characters. While I was super happy about this execution,  I decided to go back to make this piece a little more personal.. much like the Loveless Letter’s Series.

I was back out in Athens at the time in December of 2014 interviewing for my MFA at the University of Georgia. It had been a while since I had been back to a place that I previously lived, and the sights and sounds of my old stomping grounds began to sweetly haunt me with flashbacks of my teenage years.

It was here out in Athens, where music was the most important to me. .. as it was here that I ran away from home at 17 from the parking lot infested suburbs of Atlanta, and out into the deep molasses thick humid forested South of North Eastern Georgia. I was a mess of emotions from leaving home, and consistently had my headphones on while I got a ride to and from work. Sometimes, I couldn’t get a ride home, and would walk 7 miles down from the 2300 block of Broad Street (HWY 78) to an apartment off of Cedar Shoals Drive on the East Side. Don’t get me wrong, I didn’t hate the walk whatsoever, and in fact preferred to walk 2 hours with my walkman blaring different sounds that I loved. It was a chance to get out of my head, clear my weird path, and wonder about the strange and different future of a freedom I didn’t know how to handle.

20+ years later, here I was, back after my time out on the Northeast, Midwest, Pacific Northwest, and the West Coast… and all those memories came flooding back. I arrived with unfinished Mickey’s rolled up and poking out of in my backpack like a deranged man with a bagpipe strapped to his back..

The last time I was here… REALLY living here, was back in those days when music was my savior.. and I went back to all those mix tapes that I made as a kid… and they were like entries in journals masked into sound, with intricate details of little stories drawn on each cassette. . I decided to take these cassettes, and went through a youtube rabbit hole per se, while recreating a new Mickey based off of the time when music was my greatest saving grace.

Inside the Mickey you will read:

“20.5 years ago I threw garbage bags that served as luggage out my bedroom window. I was 17 and running away from home. Below my window was 2 friends and a pick up truck that drove me 76.8 miles to Athens, Georgia. Armed with a Mickey Mouse back pack and a fist full of dollars and dreams I carved out my new life in this magical country town. I was a telemarketer in a trailer off of broad street. i sold magazines to the masses, and would come home with the sound of the telephone ringing in my subconscious … so many years.. so many cities have gone by in that time.. home has become such a relative term, and I’m back here for the holidays. My heart is in knots from the southern self that i’ve lost. I see myself as that lost kid wandering down Cedar Shoals Drive with Mickey by my side, wanting to see the world. and now that I’ve seen the world, all I want to see is home. Soon there will be a shift, a rift in space for my home.”

This is the last of the Children of the 80’s series, and is number 87 in the collection.