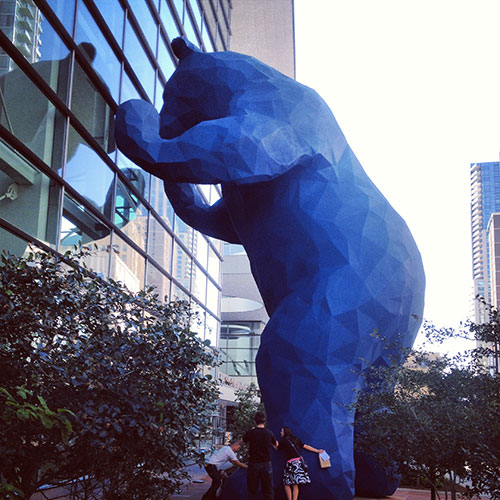 The first time I was in Denver was in my early 20’s. I was traveling from my old home in Philadelphia to my new home in San Francisco and I made a night pit stop in the SW area of the city. I only spent one night there, and my only real memory of the city.. was the awful impression I made in a bar called “The Snake Pit”. I should say I was asked to leave the bar due to an alcohol/5280ft+ altitude issue, and something involving my unwanted drunken reinactment of Sally Field’s epic meltdown in “Steel Magnolias”.. repeatedly.

MANY years later I visited Denver to collaborate with a new gallery on my metropolitan series with the TENxTENxTEN collection. In short, I visited the city to figure out how I was going to fit all of Denver into Mickey Mouse’s face.

What I wasn’t prepared for, was the overwhelming splendor that Denver had to offer. Seriously, all cheesiness aside with the ‘splendor’ comment.. Denver is an amazing city. I have now been referring to Denver as “California.. but with a filter that sifts through all the things you don’t like about California”. .. if that makes any sense. Its natural beauty is almost unreal.. and the citizens.. who somewhat remind me of down to earth Seattleites. . are incredibly warm and friendly. The most important thing.. is that Denver is a city that supports itself socially and economically. They believe in small business and have a multitude of events that really bring the citizens to enjoy what the city has to offer.

I stayed with a friend who I hadn’t seen in 18 years. .. We grew up in the roller rinks of Marietta, GA.. and went to high school together in downtown Atlanta. She extended her home to me for the weekend and taught me all the basics of the city (where to go, how to ride he RTD, and what I needed to draw about). On top of that, The Thomas Kinkade Gallery of Centennial, CO really went above and beyond to show me every single one of Denver’s main attractions.. and even took me to a punk rock show that one of their coworkers was playing in. I ended up in the evening laying on the grass in the park, watching one of the most amazing sunsets I have ever seen in my life, and listening to live jazz echoing across the lake.

Where I really thrived was on my solo walk through the city. There is something about getting lost in a beautiful city that really connects you to where you are. I ended up coming up with this idea for the “Loveless Letters” series when I was painting at this cafe and overheard this woman.. who was upset about her lover and her not having the right star sign alignment… She ended up saying ” Oh he and I aren’t mean’t to be.. we are just trouble written in the stars”. I began to walk around the city and picked up conversations all over different places, and interpreted them into Mickey’s face… I ended up carrying that project to Los Angeles, Anaheim, Washington D.C., Philadelphia.. and eventually New York City. Every time I unfolded the canvas.. no matter where I was.. I was automatically transported back to Denver.. and the time I had there.

The one thing that I wanted to mention more than anything in this blog, was my trip to the DAM (Denver Art Museum). Now I’ve been traveling all over the country for the past 2 years to visit various cities, and in every city that I go to.. I make sure to check out the museums of that particular city. Hands down, the DAM was the best museum I have ever been to, and I’ll tell you why. It takes a lot to curate a collection.. but it takes incredible talent and heart to bring the public into the realm of an artist. The DAM doesn’t just curate a collection, it creates an INTERACTIVE experience to the public, so that people can REALLY understand and feel the work. Not only that, but they’ve created a space for children to experience and play with the work. In example the featured artist was Nick Cave and his sound suits exhibit. This was the first time I was able to see his work, and on top of that I got to go by a room where there were punching bag replicas for the children to play with.. plus a wall where children could mix and match his icons into workable pieces of art.

(I also got to see Sandy Skoglund’s “Fox Games”, which was in my bucket list of pieces to see.)

In the end I had to leave Denver back to LA, and I really felt that I didn’t get the entire grasp of the city like I wanted to.. Sure.. if I didn’t like the city I could have gone home and created the piece and not thought about it.. But visiting there.. I really felt like I had made a connection to that city. It was beautiful and calm. The people were engaging, friendly, and helpful. I couldn’t help but be a little depressed when leaving.. so much that I plan on making Denver one of the cities that I return to often. Who knows, maybe if I play my cards right, I can get an artist residency, fellowship, or teaching residency at one of the art colleges. Either way, I want to make Denver a more permanent place for me to thrive in. It is one of the most fascinating cities I have ever been to and I miss it terribly.