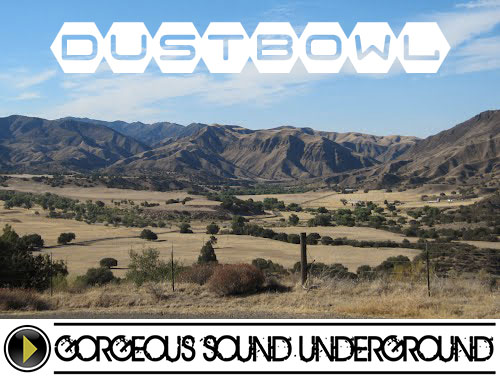 Past Coalinga, California.. our bus continued through the middle of night to San Francisco. I sat there with my laptop and shaky wireless connection to compile a set about my travels through the middle of nowhere. The man behind me, was on acid, and dancing to contemporary rave music while laffy taffying his arms around like a drunken gumby. His fingers had laser devices attached them them, and he was playing with this strobe light ball. He was half magician, half ninja, and completely fucked up. With my hoodie on, I lowered in my seat to distract myself from the laser show that was bouncing off the walls, and began to think about my travels through the dustbowl.

From 2004 till now, I have traveled through the dustbowl around 40 times which is around 160,000 miles back and forth and forth and back. Just alone in the past 5 months I have been through this area 8 times. I’ve done a broadcast about it before and talked about this place often. I suppose its because I gather most of my music and compile it along this stretch of road. From the Los Angeles mountains, Lebec, Gorman, Grapvine, Tejon Ranch, Bakersfield, Kettleman City, Harris Casino, Panoche, Santa Nella, Patterson, Gustine, Los Banos to the eventual Livermore to the city.. I’ve traveled so much in between these places that the Chevron and Shell gas station attendants have begun to know my name.

I love this place. I would travel the 5 North before I’d even attempt the 101 or… god forbid the jam packed 99 between these places. I like it because nothing exists. .. and when nothing exists all you have is your head to space out and think far more than when tightly compacted in the city. Its no wonder why I broadcast about it so much.

So on this trip I wanted to focus on haunting vocals intermixed with some random dance tracks. This showcases one of my latest obsessions (and I’ve been waiting for months to play this but couldn’t really fit it in) IAMAMIWHOAMI, which is an electronic project by Swedish vocalist Jonna Lee. If you are looking for some INSANE music videos, check her out. Also this features the latest release from Lana Del Rey which is featured on the Great Gatsby film by Baz Lurman (so you know the soundtrack is going to be insane).. AND the latest release from Roisin Murphy.AANNND this INCREDIBLE sensual chill out ambient track from Nico Purman.. its so good I’m going to put some of more remixes of this song in future sets of his track Mauer Park.  Its a great set filled with some fun surprises that I think you’ll like.