Jesus Christ of the Neon Heart 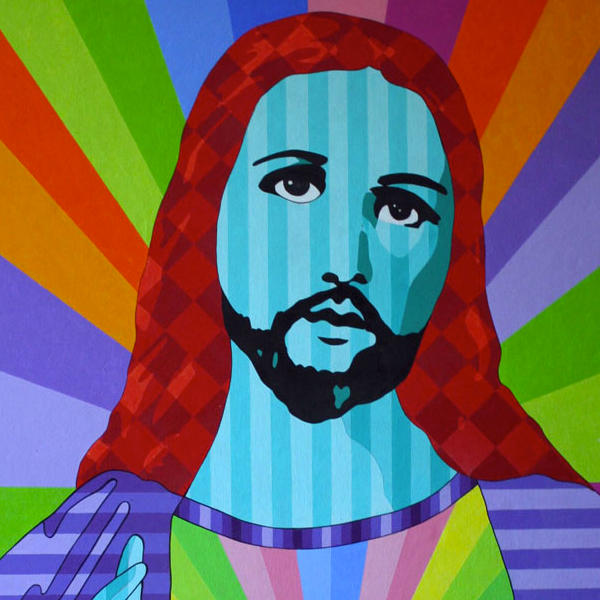 When the coroner left with the police, and I had politely asked my model to leave the apartment, I sat there alone in the living room, crumpled into this neat mess of cotton, denim, and numb skin in the only chair in the apartment. In the deafness of my head, I was in this massive desert looking desperately in the horizon for the eventual flood. I knew it was going to come, the eventual emotions, the severity of it, but for the time being, there .. was just nothing but an arid expansion.

Rewind 5 hours earlier, and I’m breaking the lock of TJ’s bathroom door with an envelope cutter to find him dead from OD’ing on heroin, a substance he was 90 days clean from, but struggled since his early twenties with. I, myself, was only 49 days sober at this point. Trying to recall this is somewhat vague as my brain tends to operate like it did as a kid, pushing all the terror and fear into a closet with a skeleton key that I don’t…. really have access to anymore. I do remember throwing myself down to him, trying to nudge, and then slap and hit him awake.. but he had been gone for hours. There are flashes of the stretcher, the medics, the police, and the coroner buzzing around the apartment like hornets… but for the most part, I began to severely withdraw from reality from the shock, that nothing made sense until everyone had left the building.

So there I was. It was just me, and the muffled sounds of the helicopters circling hollywood boulevard outside. Occasionally I’d hear the sounds of bass blaring from one of the apartments, and aspiring 20 something drunk models and actresses careening, giggling against the hallways outside my apartment. I, slothily got up after sitting in a chair and staring at the wall for 4 hours, and walked into my bedroom to grab a blank canvas off the wall, and dragged it with one hand into the living room.

It was the picture of Christ.

Now I grew up Catholic, and my previous ideas regarding this image is filled with a lot of rejection and confusion. My relation to this monotheism in my eyes as a child was that God was this very angry unforgiving Santa Claus who had a son who, for the life of him, couldn’t help but love people. I was wrapped in this wet blanket of guilt for living, feeling, and expressing myself, but not through him, but by his followers. It was strange to see his face again in my eyes, especially when I had left the church due to my peers growing disdain for my sexuality, and felt dually rejected by God rightfully so because of the circumstance.

And now, … decades later, I found myself seeing his face again.. .and I’m gathering for the most part, my brain was trying to access an iconographic image that dated back to my VERY dark and twisted childhood, when in extreme panic and fear I closed my eyes to have this person twist my fate into something promising. ..

So I began to paint him.

I spent days painting, isolating myself as I tend to do. I didn’t show up to work, I just for the time being, stopped going. I had to work on this for some reason or another, and I knew that it was the right thing to do. It was the only way I could work through my scenario, work through losing TJ, a man I was so massively in love with, work with maintaining my sobriety, work through staying afloat in the massive flood that eventually overcame my desert with rip roaring maelstrom tides. ..

And clearly I went crazy for months. I was so dumbstruck with grief that I couldn’t pronounce words, let alone have a conversation. I still, at times, struggle with communication, and I’m gathering that it won’t just go away over night.

But when all was said and done, the piece that I had envisioned in my head, had transformed on the canvas. I wrote a letter to TJ in the heart of the piece, and sealed it up tight with a titanium white overlay upon fluorescent chartreuse.

This piece, much like the Virgin Mary portrait, is not a statement of religious idolatry. It is simply a fragment of an icon I grew up knowing, and hoping would come and rescue me when I was a kid… never knowing that decades later, the idealism saved my heart from breaking, and saved my life for meaning.