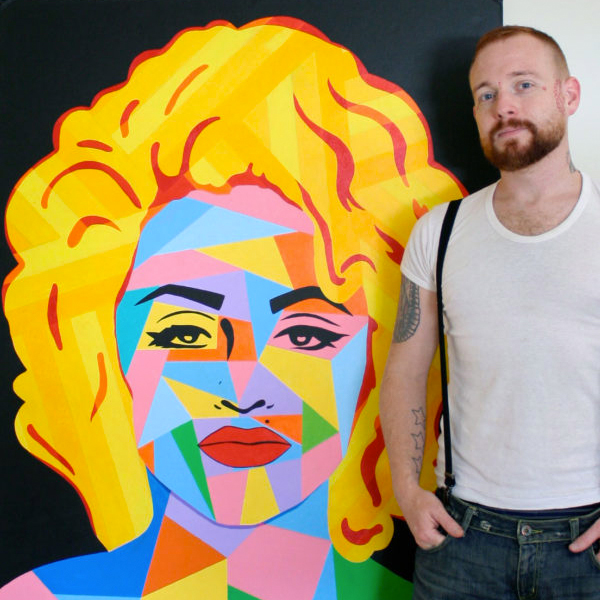 In the sweltering Summer of 2009 I moved into a tiny apartment in Los Angeles on the edge of Little Armenia in East Hollywood. I had spent the previous year in one of the darkest moments of my life as my entrance to LA was a complete albatross landing. Desperately seeking recovery, I moved what little possessions I had into this place, including two massive canvases that I found in a dumpster outside the Disney Consumer Products building. In what I can only remember as months of shaking and sweating, I slowly but surely regained my sense of self through retraining my hands to paint. I brewed tons of coffee, and like a hermit, spent most of my time indoors focusing on these large canvases to get me through the day.

The pieces that I worked on concentrated on the idea of tangible deities. Idolatry in religion and celebrity culture take parallel psychological nature in the fact that there is an element of worshipping something thats being broadcasted. Granted, this concept is no stranger in the artworld, clearly because pop art is art on POPular culture, but I still wanted to do this. I wanted to focus on painting icons, because I needed to understand something greater than myself, and in our socially constructed media bred world, the bigger the broadcast, was a direction closer to God. It makes sense to me, why I did this. Growing up Catholic, I was brought to believe that there were humans who were direct microphones to God’s answering machine. This type of education socially constructed me to believe that musicians and artists who were on TV had the same element of stardom that equalled a sort of god like quality. And even though that idealism has deteriorated as I grow older, I wanted to pay homage to it.

Dolly Parton (Painting Entitled: Dolly Llama) was the first piece to be painted. The second one was called “The Madonna Grid”, in which I spent 2 months painstakingly creating these small squares across Madonna’s frame in a simple color scheme that I was comfortable understanding. As I recovered more and more, I was able to gain strength and dexterity in my hands again. My paintings grew more and more, and my brain began to operate more on a complex level that I had, for the most part, never worked on.

I was happy and clear headed for the first time in many years, and very appreciative of my time of recovering in that dingy old apartment (even if it was Cher’s old apartment building, and the small studio happened to be her old dressing storage unit). However as time moved on, I’d pass the painting and see the shakiness of the lines and smudging of the paint. I knew I was to be grateful and see those lines as elements of attempting triumph, but in the back of my head, it brought me to moments of when I was recovering from the worst moments of my life. I wanted to, in respect to my worst days, paint over this piece at my point now where I am at… to where my hands work again, to where they are fully recovered, to where my brain works, and my imagination flourishes.

I wanted to show my metamorphosis.

So I smeared a slab of white paint on the canvas so I could never go back, and only go forward. … and I worked day and night again, re painting the ENTIRE piece until it was done. When I had finished, I stood back and felt this wave of accomplishment come over me. It was a whole new direction on my work, and a whole new phase in my life. This piece is about finding that peace, and that serenity in coming from terrible times, putting faith (blind or not) into things greater than our selves, and paying homage to the power of the broadcasted.