September 7, 2013 by Tennessee Loveless in Odds and Ends ⋅ TENxTENxTEN 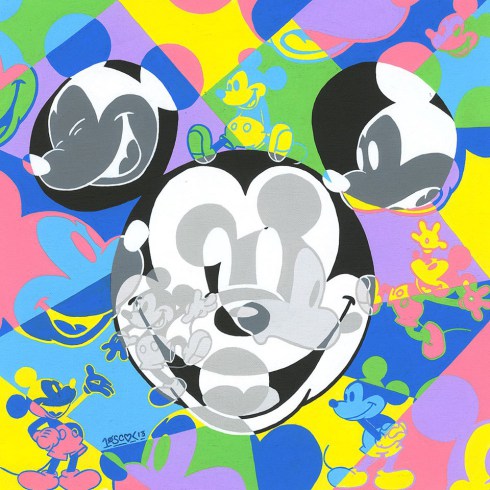 Merging Mickey into other worlds that were foreign to him became more of an easier task as the project moved on. It seemed to be more difficult once on this path, to merge Mickey within himself. This raised the question,

“What would Mickey see, if he got to look inside his own head?”

I suppose you could call this a sort of “John Malkovich” approach to the subject, since thats clearly the only surface reference that comes to mind, but it seemed to work when looking at the idea. I would imagine, that if given the chance to do so.. Mickey would be thrown into a twirling kaleidoscope world, filled with a maelstrom of emotions clamoring about. While there would be structure, the complexity and multitude of being would be overwhelming.. creating this world of chaotic happiness..

This piece is called “Multi Mickey” (originally I wanted this to be called “Multiple Personalities”), in where Mickey’s in different sizes and expressions float through the central figurehead of the TENxTENxTEN Mickey silhouette. This is the 4th piece within the “Disney History” Series, and the 67th in the collection.