“The Definition of Character”, Battle of the Senses Series, No. 19

April 10, 2012 by Tennessee Loveless in Battle of the Senses ⋅ TENxTENxTEN 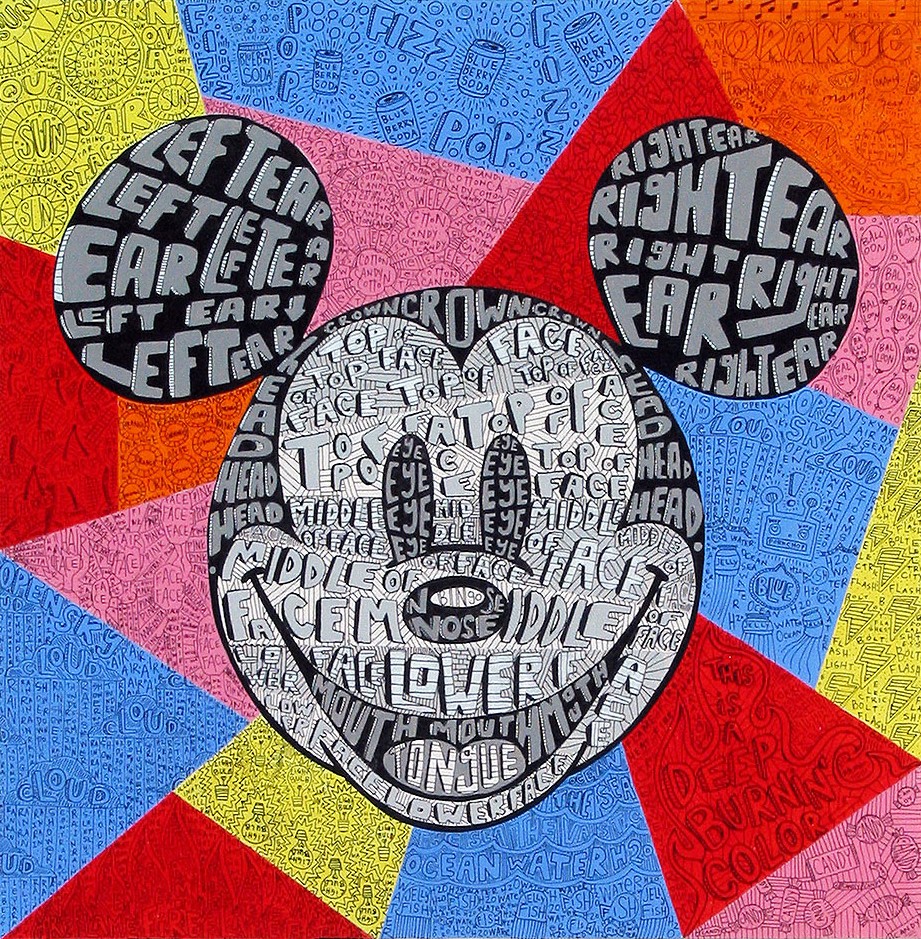 This piece is a part of the “Battle of the Senses” Series. This piece, like most pieces, started out as an accident. I just sat over this and mulled around it for a few minutes within my studio. Desperately trying to find something to draw about I just watched whatever program was on and doodled around the face of Mickey. In the eyes I wrote eye… and then slightly lackadaisically wrote the word tongue in the tongue. I paused over the piece with my pencil and just haloed over it for a second while my brain started clicking and whirring. I felt my eyes close in like the F stop shutter in a camera zeroing inwards into a miniscule pinpoint. The next thing I knew, hours had gone by, it was 4 in the morning, and I was halfway done with the piece.

Even in being the so called ‘wild card’ in the licensing world, I’ve for the most part kept my commercial work VERY separate from my non commercial work. The first ever merge between the two was the experimental pieces on this collection throughout the pop series and transition into the stream of consciousness series. This marriage between the two in this piece shows the controlled chaos in more of a literal sense here. Every thing is labeled as it should be. The eyes are labeled eyes, the ears are labeled left ear and right ear, the crown is the crown and so forth and so on. … The background is the same, the pieces are in shards, and each drawing is an object that represents the color. Not only are they objects, but the words are encased in the shape of the object for ultra-representation.

This is the ultimate of being.

This is the definition of character.

(Side Note: For those questioning the robot in the piece that does not match in the color coding shards. That is an homage to Leonard Porkchop Zimmerman, a brilliant artist whose work has had influence in my recent pieces)