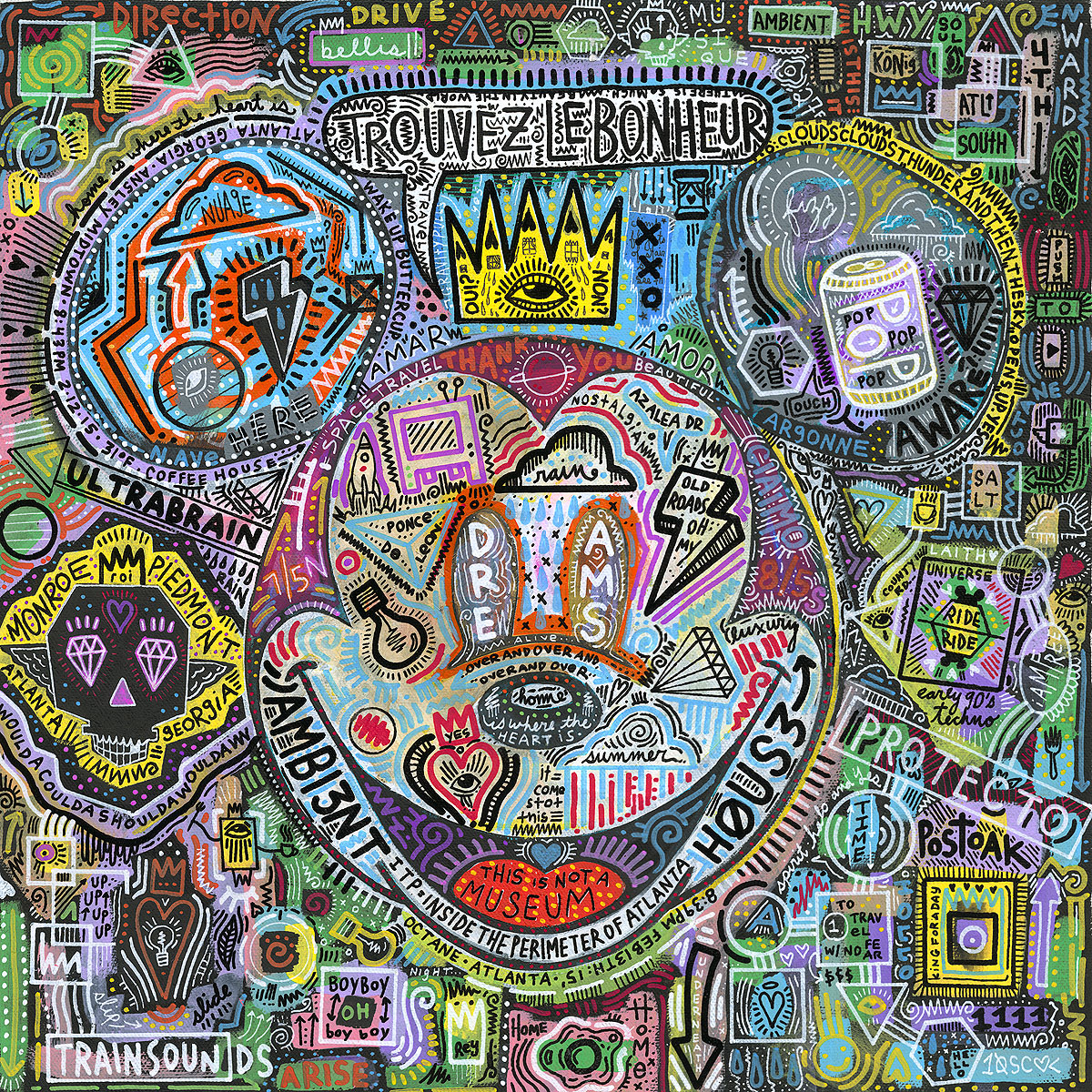 In deep winter out in Chicago, I boarded the CTA train in the middle of the snowy night and headed out to O’Hare.. Groggy from little to no sleep, I passed in and out of slumber on the blue line until the train stopped at my location. Zombielike I managed to sloth through security half awake and I finally boarded my plane. As my plane lifted up from the frozen wonderland of the Midwest, I watched the first parts of morning light hazily whisper through the darkness. .. and I fell asleep with the thousands of thoughts about where I was landing.

.. my old home of Atlanta, Georgia.

For years I had traveled to Georgia, but rarely did I ever spend much time in Atlanta. For the most part I’d find some excuse not to go, and would hurriedly grab a shuttle that would scuttle me through the southern parking lot of a metropolis and out into the warm forested thickness of north eastern Georgia.

The further I got away from Atlanta, the less I had to think about it, and it was no disrespect to the city itself.. Atlanta was a beautiful place, but I struggled with that city growing up, and even after 15 years of being gone, I always felt that there was a time bomb lodged in my heart, and Atlanta held the nostalgic trigger to set it off.

This time however as I left Hartsfield airport, I did not grab the shuttle to Athens. I thought about it, and I even stood in the shuttle yard walking back and forth muttering crazily to myself as I saw the van roll up to the waiting station.. but I did not board it… I turned around and took the MARTA train up North, while tightly gripping a rolled up blank mickey canvas in my sweating hands.

I was here in Atlanta for a reason, and it was to paint about the city in the most abstract emotional sense, because for 15 years I refused to really be here. I had spent a little time here with another piece a few years back called “Ozark Diamonds”, so I wasn’t completely unprepared, but this trip had a purpose of deeply spelunking through the core of my history out here… which was such a different process. Secondly I was returning to the place I was raised on such a different emotional context, because I created Ozark Diamonds while STILL searching for a place that I could call home, and I hadn’t found it in Los Angeles… now in Chicago, I wanted to finally.. in some way speak about where I was raised, now that I felt stable with a place I could confidently call ‘home’.

I was picked up by my best friend Ryan at one of the northernmost stations of the transit system. Ryan was one the longest friendships I had, which fatefully started while hanging out in the parking lot of a midtown gay bookstore called “Outwrite” in the late 90’s. In our relationship, in which I referred to him as my “little brother” he always seemed to be driving me everywhere. I had a car mind you, but Ryan loved to drive me around sweetly enough.

As I got in the car, I was reminded of all the times we drove around aimlessly together. Sometimes in the middle of the night I’d find myself with him, blaring trip hop music dustily through the dark and glittering streets of Virginia Highlands and Little 5 Points. It seems I had forgotten what happiness I had in those moments, and pangs of guilt wrapped around me, as I had.. for so many years thought about the bad things over the good things of this town.

What I feared about Atlanta did not transpire, and in fact the entire trip I was thrown into a wonderful rollercoaster of memories about Atlanta. This city, was in fact the FIRST place where I learned that there were amazing things beyond suburbia, and that inside the perimeter laid the elements that I never knew existed. We were suburban kids alright, jaded from the often oppressive beige regimes of the mundane and conservative, but here.. in Atlanta.. we could be brilliant. We could be firecrackers splitting the metropolitan stars into the wee hours of the morning.

Ryan and I sped past Peachtree street’s glittering lights, and down into the modified sectors of North Avenue and beyond. Memories welled up into the locations of my upbringing.

There was the place where I first kissed someone

that was the place where I first fell in love..

that was the place where I first got my heart broken..

and there.. thats where I learned something..

I furiously drew over the days in all these random locations that may have been just 4 walls, a roof, and some commerce to others.. but to me, they were symbols, icons, and anchors to my emotional topography. I was so immersed and fascinated with the things that I had forgotten, that when I took the train south to the shuttle yards to board that bus to Athens.. I stood there again.. walking back and forth, muttering to myself on wether I wanted to get back to that comfort I had so emotionally lazylike done for so long. ..

Sometimes we forget who we are when we leave the very place that helped tell our first story. Sometimes, when the negative things in our geographic history stay in the place that we left, they fester and grow like a garden untamed when we are gone, and when we revisit those old fields of the things that made us sad, we are left with a place overrun with plants, weeds and trees of hurting memories that are much larger than they were when they were first planted.

Sometimes these gardens are so wild, that our lovers, our friends, our “little brothers” become obscured in the brush of emotional kudzu, and we can’t find them because we are so lost on our path… and we are filled with the fear of returning to these places because we just don’t know how or where to begin in taming our garden.

… but when we do clear the path of that festering history of heartbreak, fear, and nostalgic terror.. we begin to see the people we loved and the people who helped us appear clearly on the clean green lawns of our past..

And we begin to recall who we are in our skin by remembering our skin.

This piece is called “Trouvez Le Bonheur”, which means “Find(ing) Happiness”. In this painting you will find an emotional map of Atlanta Georgia (and the Metro Atlanta area) by means of nostalgic pathways of my experience in the 90’s. There are physical locations like Ponce De Leon, Argonne, Monroe and Piedmont, Azalea Dr, Post Oak, and 4th Ward. Timestamps of actual drawing are at Octane, Atlanta.. and a random coffee house in Ansley Square complete with time and temperature. Other words and symbols are memory anchors of my time out there. T