“Wake Up and Smell The Sound of Coffee”, Loveless Letters Series, No. 11 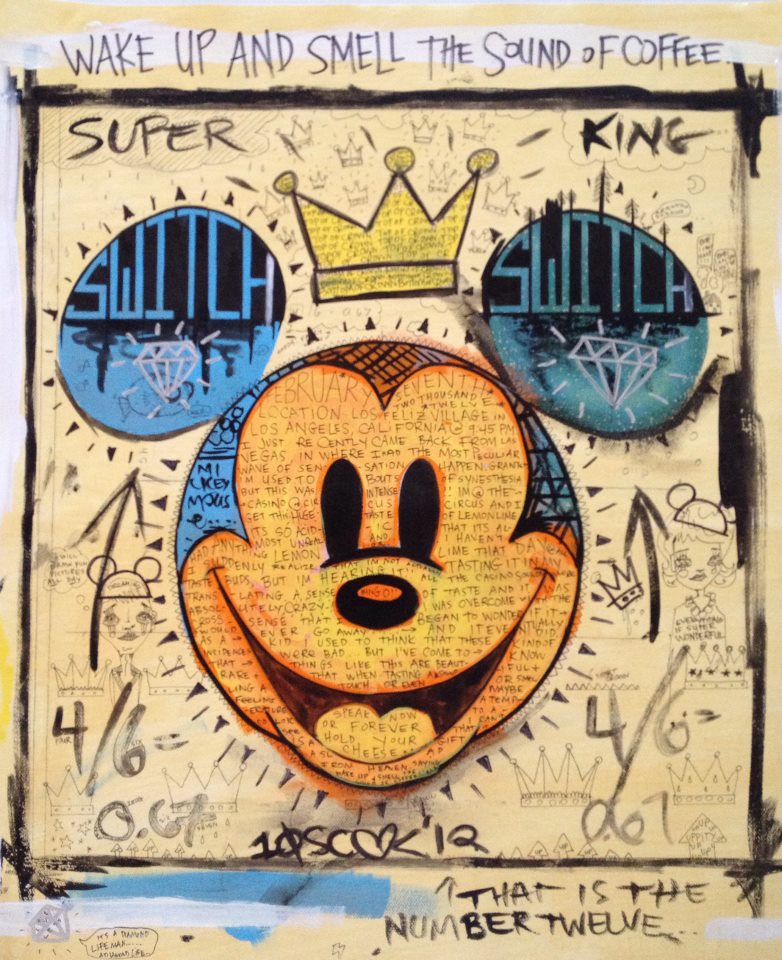 There are no mistakes in life, and there are certainly no mistakes in art. There are no wrong turns, just unexpected ones. After all, what would be the point of our life if everything was a linear path? IF…. our lives were built on a straight shot from point a to point b,  how misguided would our potential be? Our lives were built for swooping circles, twists and turns. These unexpected blips of chaos are the very ones that remind us why we are alive, question our purpose, and ultimately guide us in new directions.

With that being said, the whole different direction of this project was created off of one accidental pen mark. I’ll explain further below.

So far No. 1 – No. 7 were relatively safe executions. These were pattern saturated concepts with understood color schemes that I was safe with. No. 8 through No. 11, were at best starting to split from the normal ranges of work but still geometric in form.

No. 12 was the gateway into a new series I call the “Loveless Letters” Series, and it all happened to do a rough draft that was due to be used and destroyed for printing press purposes. In my line review of my work, No. 8 through No. 11 came with some criticism. The barcode and dollar signs were immediately nixed, and I was asked to change the television piece (Toon In, Tune Out, No. 09) ‘s text to “TURN ON/TURN OFF” to something else because it might be misconstrued. We agreed to change the word to “SWITCH” in order for the piece to go to production.

So here I have this blank uneven canvas (which is unable to be stretched), a Mickey drafted out, and I’m creating the words “SWITCH” in the ears. When I was done, I looked back at it for a moment. Here was the dodgy piece, just kind of laying there, and it just felt unused, and filed with white space (which is something I cannot stand). I had slipped my sharpie marker from writing something next to the canvas, and created a V-shape over Mickey’s head by accident. I immediately drew an uneven crown to leverage against the mistake. I paused and sat back. The silence in my head was deafening. It was then my whole vision tunneled towards the canvas, and I, for the next hour completely went into an artistic blackout.

When I emerged, I saw this strangely structured stream of consciousness piece in front of me. This was beyond anything I’d ever done in the past few years. I was so used to well thought out, perfectly designed structural pieces, that this… was the antithesis of everything I stood for as an artist.

This was not clean, safe, and sound. This was raw, deep, organic, and textural.

The face was the last thing that I worked on, and rather than design a pattern inside like I was used to, I decided to write instead.  I wrote this in homage to Paul Festa, the catalyst to all of this really. I will share with you in the next piece why Paul was an instrumental figure into this awakening.

I just recently came back from Las Vegas in where I had the most peculiar wave of sensation happen. Granted I’m used bouts of synesthesia but this was intense. I’m at the casino at Circus Circus and I get this huge taste of lemon/lime and its so acidic that its almost unreal and I haven’t had anything lemon lime that I suddenly realize that Im not actually tasting it in my tastebuds, but I’m hearing it. All the casino sounds were translating a sense of taste and it was absolutely crazy. I was overcome with the cross sense that I began to wonder if it would ever go away (and it eventually did). As a kid I used to think that these kinds of incidences were bad, but I’ve come to know that things like this are beautiful and rare and that when tasting a sound or smelling a touch or maybe even feeling a temperature to a color. That is a gift. A slap from heaven saying WAKE UP AND SMELL THE SOUND OF COFFE!”